Are you looking for information regarding cholecystectomy and experts for gall bladder surgery? Here you will exclusively find experienced specialists and clinics in Germany, Switzerland and Austria. Learn more about indications, procedure, risks & prognosis or get in touch with our experts.

Specialists in the Field of Gall bladder resection 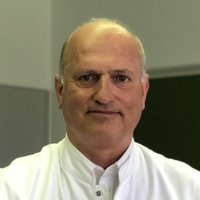 Information About the Field of Gall bladder resection

Role and function of the gallbladder

The gallbladder is a pear-shaped organ situated at the bottom surface of the liver. It serves to store and concentrate bile secretions by extracting water from it.

Bile is produced by liver cells and via the hepatic duct it enters the gallbladder which itself cannot make bile. Bile is not produced by the gallbladder itself. Bile is composed of water, electrolytes, bile acids, cholesterol, bilirubin and a number of other substances. Bile is an important substance for the elimination of drugs, toxins and breakdown products from the body. After being passed into the intestines, as much as 90% of the bile acids and biliary pigments are reabsorbed. We also refer to this as the "enterohepatic circulation".

Another purpose of biliary secretions is the digestion of dietary fats. Bile constituents will bind fats and fat-soluble vitamins and render them absorbable and thus nutritious for the body.

Diseases of the gallbladder

Diseases of the gallbladder frequently present with two major symptoms. Yellow discoloration of the skin, also known as jaundice, and pain on the right side of the upper abdomen.

Jaundice always suggests a disturbance in the biliary system. It can have a wide range of causes, for example hepatitis , chronic liver disease or intoxication as well as an obstruction of the outflow of bile, which can occur in the case of gallstones . Jaundice results from deposition of bilirubin in the skin, which either increasingly accumulates in the body or cannot be excreted.

Pain in the right side of the upper abdomen can typically spread to the right shoulder or flank. Colicky pain may point to gallstones, while constant pain may signify an inflammation of the gallbladder ( cholecystitis ).

Both benign and malignant tumors of the gallbladder produce comparable symptoms , but they are managed differently than gallstones and inflammation.

In case of which diagnosis is gallbladder surgery needed?

A suspected diagnosis of gallbladder disease can be mostly established by characteristic complaints of the patient and can be confirmed by elevated laboratory values (bilirubin, LAP, GGT, AP) and ultrasound scans of the upper abdomen.

The most common and significant finding that warrants gallbladder removal is the presence of gallbladder stones that cause symptoms. Acutely inflamed gallbladders must be removed as they may give rise to serious complications if left untreated. Gallbladders that are inflamed or filled with stones can rupture (perforation) or produce pus (empyema) and spread throughout the entire abdominal cavity resulting in a life-threatening inflammation (peritonitis).

Chronic cholecystitis can progress to a so-called porcelain gallbladder, which bears an increased risk of turning into a tumor. Gallbladder stones which do not cause any symptoms generally do not need to be treated. There is also a degree of flexibility whether the removal of gallbladder polyps and papillomatoses is advisable.

Procedure: What happens during gallbladder surgery?

At present, laparoscopic cholecystectomy represents the gold standard for treatment of symptomatic gallstones and cholecystitis. Over 90% of all gallbladder removals can be performed minimally invasively and the benefits are as follows:

To begin the procedure, the abdominal cavity is inflated with a gas mixture of carbon dioxide and helium, also known as pneumoperitoneum. The abdomen is then opened and visual equipment and surgical instruments are introduced. For this purpose, the surgeons usually make four incisions in the abdominal wall.

Once the gallbladder has been located, it can be gripped behind the liver and pulled upwards in the direction of the diaphragm. By doing so, the so-called Calot's triangle is stretched and becomes visible. The Calot triangle refers to a surgical landmark created by the cystic duct, the cystic artery and the common bile duct. The surgical conditions can be greatly complicated by a gallbladder that is severely inflamed.

Open surgery to remove the gallbladder continues to be employed less frequently. During this procedure, an abdominal skin incision is made underneath the right side of the ribcage, which can be extended if necessary.

The following surgical steps correspond to the laparoscopic cholecystectomy. Also this procedure is associated with a very low complication rate.

Risks and prognosis of cholecystectomy

With a lethality rate of less than 0.1%, laparoscopic cholecystectomy of the gallbladder is considered to be very safe. Potential complications of laparoscopic surgery include missed out gallstones that remain the common bile duct or in the abdominal cavity (residual stones). In addition, the procedure carries a risk of injuring structures like the hepatic artery or bile ducts.

Conventional cholecystectomy has a relatively low risk (0.1%), too. After the surgery, bleeding, formation of abscesses or biliary fistulas can arise.

Which doctors are specialists for cholecystectomy?

If you require a cholecystectomy, you expect the best medical care possible. So of course patients are curious to find out what clinic to go to. As there is no objective way to answer this question and a legitimate doctor would never claim to be the best, patients must rely on a doctor's experience.

Let us help you find an expert for your condition. All listed doctors and clinics have been reviewed by us for their outstanding specialization in the field of cholecystectomy and are looking forward to your inquiry or wish for treatment.