The treatment of scoliosis in transition - When is surgery necessary?

Scoliosis is a lateral deviation of the spine (1, 2). This usually involves torsion of the individual trunk sections as well as a change in the side profile (sideview). Therefore, it is called a three-dimensional trunk and spinal deformity (Fig. 1.). The severity of the deformity is measured clinically with a specially designed water balance (Bunnell scoliometer) and/or the x-ray image (Cobb curvature angle) (3, 4).

Fig. 1.
Scan of a scoliosis patient in three views.
We can clearly see the lateral deviation of the torso,
the rib hump and the concavity of the thoracic spine.

Scoliosis can worsen during periods of increased growth (2, 5). This stems mainly from the growth phase in puberty. The worst cases are observed in this growth phase with deterioration of 20-30° occurring within a few weeks (Fig. 2.) (4).

Most scoliosis cases have mostly cosmetic importance, i.e. serious health disorders are not to be expected in most cases (2, 6). Only a very small percentage of all scoliosis cases cause curvature of more than 100° with this curvature severity possibly leading to reduced life expectancy (7, 8). 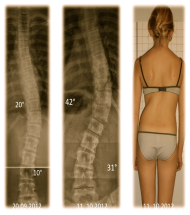 In current textbooks, the following is recommended at growing age (9, 10):

This treatment recommendation has been handed down for decades, but it is not based on scientific studies.

New insights have been gained in the last decade. Therefore it is time to review traditional treatment recommendations.

Evidence-based medicine involves a qualitative gradation of studies from those with the least probative (stage IV) to those with the highest probative value (stage I). Generally only high-quality studies concerning guidelines for the treatment of certain disorders are considered. These are so-called prospective controlled studies (level II) and so-called randomised controlled studies (level I).

Evidence in the treatment of scoliosis

For specific (corrective) physiotherapy as well as for back braces, studies with the highest probative value are required (stage I and II) (11-14). However, this is not true for scoliosis operations (15-17). Moreover, it has now been found that the long-term complications of the routine operations greatly exceed the potential complications of non-operative scoliosis (15, 18, 19). It has become known that the deformity of the trunk (rib hump) one year after the surgery is again amplified (Fig. 3.) (15).

Fig. 3.
Late result of scoliosis surgery on lateral access.
The curvature is straightened very well in the radiograph (left).
However, the rib hump reoccurred within a year of the surgery (centre right and right images).
On the right scapula (centre right), the upper portion of the laterally extending scar is still visible.

A recent long-term study (20) showed that surgically-treated scoliosis patients are somewhat more likely to suffer pain than adolescents supplied with a brace. Completely untreated patients suffered pain comparatively more often. In addition, the incidence of pain complaints intensified as time passed after surgery (21). Therefore, from a purely scientific point of view, there is no justification for scoliosis surgery to prevent pain. The other signs and symptoms of scoliosis cannot be safely eliminated through surgery. Several authors have pointed this out (15, 17, 22, 23).

Through the findings of the last decade, there has been a paradigm shift towards conservative (non-surgical) scoliosis treatment. Modern conservative treatment methods (here the high-quality back brace is in the foreground) are not only capable of resolving curvature issues in growing children. Nowadays one seeks to improve the trunk deformity and curve straightening can be seen in the radiograph (Fig. 4.). 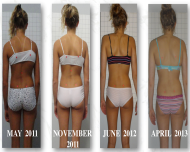 The back brace may be unproblematic nowadays. Unfortunately, the standard of care in Germany and around the world is still very inconsistent. Care centres with above average standards are unfortunately in the minority. Back brace pain should be a thing of the past (4). Unfortunately, patients and their parents are still today often advised that pain may be caused by back braces and can be unbearable.

The Gensingen brace designed by Dr. Weiss (GBW) is relatively small and provides good correction while still being comfortable (Fig. 5.), a standard that is still a rarity. The latest CAD/CAM series (Computer Aided Design/Computer Aided Manufacturing) of braces can be produced without using a plaster cast. A full scan of the patient's body is sufficient for making the brace (Fig. 1.). 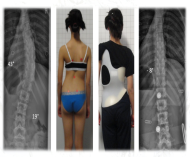 Fig. 5.
Very good curvature straightening with a GBW brace (Gensingen brace designed by Dr. Weiss).
The brace is relatively small, highly corrective and yet comfortable. It is a standardised
CAD brace with digital brace adaptation. The mirroring of the curvature pattern in the brace is visible to the layman. This is the visible sign of good curvature correction.

However, patients and their parents struggle to know which centres to trust. Scoliosis treatment requires great experience that cannot be found locally because of the rarity of the disease. Before the conclusion of the treatment contract, patients should ask to see the equipment. If the brace does not change the curvature pattern significantly (Fig. 5 and 6), then the local should be refrained from.

Another important point is timely brace treatment in growing children. Curvature increases during the main growth phase are possible within a few weeks (Fig. 2). Therefore, we provide you with the GBW as required within one week. 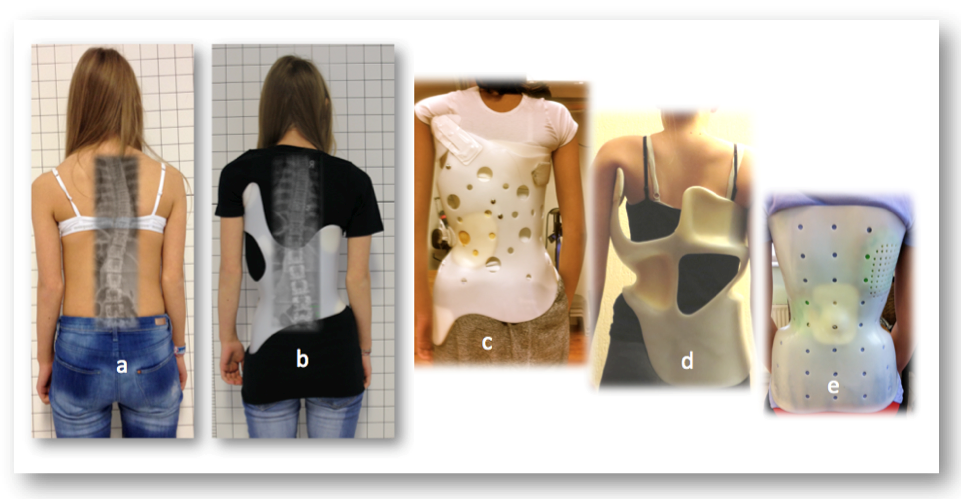 Fig. 6.
A good brace is characterised by a reflection of the curvature pattern (a, b).
The other braces depicted (c-e) are all created using the same curvature pattern, but do not reflect the curvature pattern. They offer significantly worse correction and are also uncomfortable. They are heavier and usually have poorly-balanced pressure zones causing painful compression effects.

The need for scoliosis surgery fades into the background with the latest developments in the conservative method. More significant long-term risks (24) should only affect a few patients according to the latest findings. Scoliosis surgery is only required in exceptional cases.

The specific non-surgical treatment of scoliosis with the focus on optimal brace treatment is promising according to the latest findings. The latest developments offer the best results with a low patient stress. Scoliosis surgery is only justified in a few isolated cases.