PET/CT with radioactive-labeled DOTA-TATE is used for staging tumors (NET). In principle, the method can also be used to diagnose other tumor diseases using suitable tracer substances.

Specialists in the Field of DOTA-TATE PET/CT 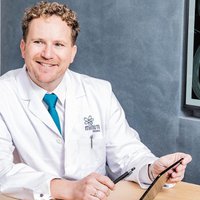 Information About the Field of DOTA-TATE PET/CT

A PET/CT is a nuclear medical combination examination used in tumor diagnostics. By computed tomography (CT), a high-resolution cross-sectional image series of the body is recorded, based on which the internal organs and tissue structures can already be well assessed concerning pathological changes.

The patient is also given a low-level radioactive substance that accumulates strongly in tissue suspected of containing tumors and sends signals to detect the smallest tumor foci. This method is called positron emission tomography (PET). Most often, radioactive-labeled glucose is used because tumor cells have a particularly active metabolism. The increased glucose turnover of the suspicious cells can now be localized in the tissue with millimeter precision with simultaneously used computed tomography.

In neuroendocrine tumors, the tumor cells present increased somatostatin receptors on their cell surface. In a DOTA-TATE PET/CT, a somatostatin-like substance (DOTA-TATE) is coupled with radioactive gallium-68 and administrated into the bloodstream. It acts as a precise navigation system and docks with the appropriate somatostatin receptors of the neuroendocrine tumor cells. This enrichment can now be visualized in cross-sectional imaging so that even the smallest metastases can be precisely visualized.

For Whom Is the Examination Suitable?

PET/CT with radioactive-labeled DOTA-TATE is used for staging neuroendocrine tumors (NET) . In principle, the method can also be used to diagnose other tumor diseases using suitable tracer substances.

In a large number of tumors, a presentation of somatostatin receptors has been detected, which qualifies these tumor types for diagnosis using DOTA-TATE. These include mainly: neuroendocrine tumors of the digestive organs and lungs, breast cancer , lymphomas , renal cancer , and thyroid tumors . Therefore, DOTA-TATE-PET/CT is indicated for localization, progression, resettlement diagnosis, and therapy planning in corresponding tumor classes.

Procedure and Duration of the Examination

The patient does not need to fast on the day of the examination, and medications can usually be taken as usual, only in the case of somatostatin analogs or known intolerance to contrast agents. The attending physician should be informed when making the appointment for the examination.

After the medical consultation, the patient receives the somatostatin analog DOTA-TATE via vascular access, usually in the arm vein, previously labeled with a radionuclide, e.g., gallium-68. In addition, a fluid infusion is typically administered to promote renal excretion of the contrast agent. Depending on the problem, another drug may also be administered to calm the intestinal loops' movement. After an adequate period of at least 30 minutes, a sensitive camera takes a high-resolution whole-body image. This procedure takes place in a lying position and takes about 20-30 minutes.

Risks and Side Effects

There are no known, frequently occurring side effects of the radioactive substance. A whole-body examination with Gallium-68-DOTA-TATE is associated with a low radiation exposure, which corresponds to approximately one to two times the natural radiation exposure in Germany (~ 2.1 mSv per year).

When examining children, the injected dose is reduced accordingly. In addition, the duration of radiation exposure in the organism can be further reduced by sufficient fluid intake and frequent emptying of the bladder. If necessary, this can also be achieved with diuretic medication.