You are looking for an experienced specialist for SIRT or liver cancer treatment? At PRIMO MEDICO you will only find institutions specialized in selective internal radiation therapy for liver cancer. We review all listed doctors and hospitals for their outstanding specialization and await your treatment request.

Specialists in the Field of Selective internal radiotherapy (SIRT)

Information About the Field of Selective internal radiotherapy (SIRT) 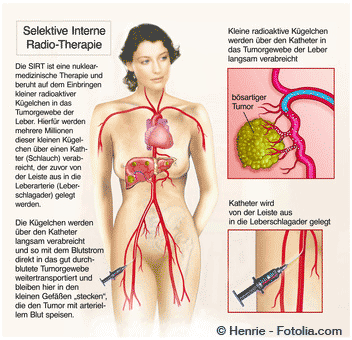 SIRT, or Selective Internal Radiotherapy, deals with advanced liver cancer tumors that can no longer be surgically removed. This treatment is applied to heal liver carcinoma as well as its metastatic growth. In this therapy, beta-ray-emitting radionuclides (primarily Yttrium-90) are directly induced by globules into the carcinogenic liver cells. This results in a beta radiation of about one centimeter of Yttrium-90 in the surrounding tissue and to a closure of the vessels that maintain the tumor. In addition, the small balls, also called microspheres, embolize the arteries that provide nutrients for the cancerous cells. This healing method attacks the tumor from two sides: on the one hand by radiation and on the other hand by embolization.

Since the SIRT-method does not promise complete healing of the liver, it should rather be regarded as a palliative method combined with chemotherapy. In some rare cases, however, the tumor could be reduced to such an extent that it could later be surgically removed.

Who is Eligible for SIRT?

Consideration for SIRT therapy depends on many factors:

To determine if an affected cancer patient is suitable for SIRT therapy, he has to consult an oncologist or nuclear medicine specialist. Pregnant women are an absolute contraindication.

Who Performs SIRT for the Treatment of Liver Cancer?

Selective internal radiotherapy is usually performed at a SIRT center by a specially trained medical team, including radiologists, oncologists, and nuclear physicians.

I am Eligible for SIRT! What Happens Next?

Before starting treatment, it is inevitable to have some examinations and blood tests done to ultimately determine the specific therapeutic concept of SIRT. The patient is usually hospitalized one to two weeks before starting therapy. Medical staff conducts certain tests to provide information about, such as, the dose of beta-ray-emitting radionuclides. Among other procedures, the medical team performs angiography (radiography of arteries and veins). At at this time, the treating radiologist closes hepatic vessels that are likely to carry radioactive particles into other surrounding tissues and organs (such as lungs and gastrointestinal tract). In addition, a pulmonary test is accomplished to give an overview of the blood flow between liver and lungs.

If test results are okay, the doctor injects the microspheres (or SIR-Spheres) one to two weeks later.

How Does SIRT Proceed in Particular?

The specialist in radiology performs SIRT as part of a four-day hospital stay under local anesthesia. This means the patient is fully conscious during treatment. After applying the local anaesthetic, the medical team completes a small incision of an artery in the groin. A small catheter leads directly into the liver tissue via this artery. Here the SIR-spheres can now be applied. The intervention can take up to one and a half hours. Any prior implemented chemotherapy must be discontinued during the entire therapy, but my be resumed after completion of the therapy.

What are the SIR Spheres Doing in my Body?

In order to understand the principle of the microspheres, we need to take a look at the physiology of the liver: A healthy liver gets its nutrients up to 90% via liver veins, when cancer cells get their nutrients up to 90% via liver arteries. Through these arteries, the microspheres, whose diameter is half the diameter of a human hair (approximately 30 microns), reach their target: liver cancer. The microspheres are so small that they can get very close to the tumor and so large that they can embolize the vessels belonging to the tumor.

Within these microspheres is the beta-ray-emitting radionuclide Yttrium-90. Reaching the place of action, the Yttrium-90 infiltrates and radiates the surrounding tissues up to two centimetres distant. Yttrium-90 achieves its greatest effect in the first two weeks after treatment. Because the radiation is locally restricted to the liver, it is able to apply a high dose of Yttrium-90 while the other organs mostly remain untouched.

What is the Benefit of SIRT?

Medical specialists generally combine SIRT treatment with chemotherapy. Studies have shown that this mixture can shrink the tumor more efficiently than just chemotherapy. This mix emphasizes an improved quality of life and increased life expectancy. Although SIRT cannot guarantee a full cure of the liver, but there are some rare cases where the tumor could be shrunk that much that it could be removed in a later surgery.

What Happens after SIRT?

After a successful SIRT therapy, most patients undergo several tests and examinations in the following days to show whether the microspheres have been applied correctly or not. Usually, the medical team monitors the patient hours after therapy to rule out potential side effects and complications.

What do I Need to Consider After Therapy?

During the first 24 hours as well as a few weeks after the therapy patients must take some precautions. These include:

These precautionary guidelines are bound to the Federal Office for Radiation Protection. Since physicians treat patients with radioactive substances during SIRT, they consider the treated persons as potentially radioactive bodies.

How Long do I Need to be Hospitalized?

As long as the medical team does not make any further observations, patients can usually leave the hospital two days after treatment and continue their daily activities.

Are There Any Negative Side Effects and Complications?

In rare cases patients may face stomach ache and nausea. Fever as well as fatigue can also be side effects. In most cases, doctors can treat these side effects with conventional drugs.

In some very rare situations, the microspheres spread to surrounding organs (for instance gastrointestinal tract or gall bladder). These organs are then often exposed to inflammations, so that further treatment of the affected organs may be indicated.